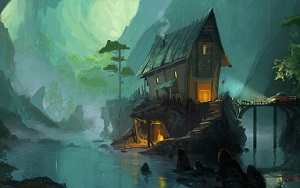 The following books will be allowed to use for character creation, spell selection, and item creation. Exceptions to the rules within these books will be stated below.